I've been intrigued by buttons in jewelry for quite a while, but had been putting off designing anything around a button.  Well, I was finally forced to use my first button last week out of sheer necessity--the eventual wearer is very sensitive to metals, and the buyer and I settled on a button and loop closure in lieu of a traditional clasp to avoid as much irritation as possible. 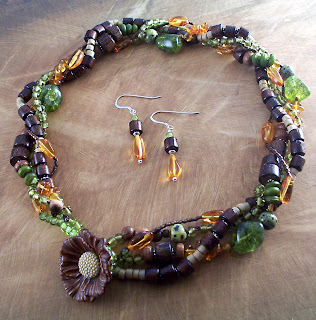 I found this sweet little resin shank button in brown and oatmeal in the shape of a poppy at the local knitting store--even the shank was plastic so there's no metal at all in it. I created the loop from glass tile beads in peridot.  The necklace is strung on two different gauges of brown silk cord. I hid tiny little silver daisy spacers deep between the wood wheel beads where they won't touch the wearer's skin, but they add just a little bit of shine.

The beads include ice flake quartz in olive green, porcelain in olive and black, amber, glass tile beads in peridot and a soft whiskey color, tiny glass seed beads in a matte cocoa finish, and lots of wood. I like it best twisted a little. 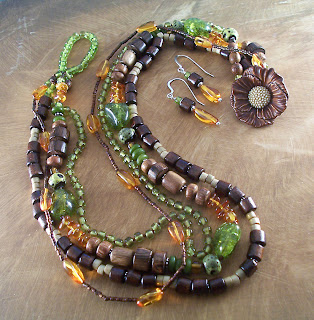 It was a little challenging to make; I thought half a card per strand would be enough (1 meter) but the knots took up a lot more length than I expected and I had to add a length of thread to one of the strands about 3/4 through to finish it off.  (It's about 19" long). Worked out fine, but I had to do some engineering.  Changed my mind twice about three or four strands, and eventually settled on four.  Phew.  I was nervous because you can't really undo those knots without wrecking the thread, and once you're started, you're committed.  The only way to change your mind is to cut it up and start over.  I'm kind of surprised I didn't have to do that!!  Lesson I learned: if you put enough crap in it, it'll look fine no matter what.  The buyer loved it, hopefully her birthday-girl friend will love it too!

I really want to do another piece like this with another button--I have an idea percolating, inspired by our stormy, glowering lilac-charcoal skies and the vivid trees with their tiny, brand new lime green leaves.  Might have to do some button shopping. 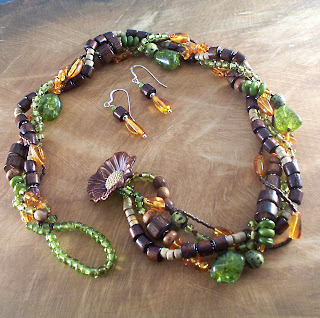 Posted by lunedreams at 6:44 PM