More Fun Than a Bag Full of Hammers

And that's saying something, because hammers are F.U.N.! You know what I'm talking about. I would pay money for a chance to win a bag of hammers.

I used this hammer 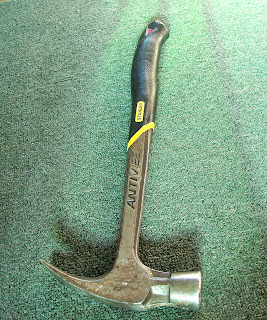 with these brass texture sheets 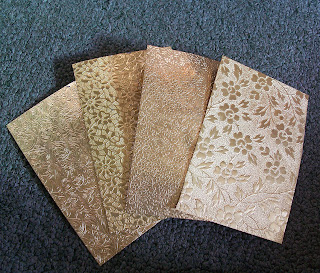 to make these floral-patterned rings. (Shh, they're copper washers from Harbor Freight).
These below I did with my metal stamps from SparklingShamrock (with glass tile beads in sort of a gray-violet):

The key is a BIG ASS hammer (the handle on this is like three feet long--I can barely see what I'm hammering it's so far away). And some reverse engineering! I've seen umpteen photos on Flickr and Etsy of these wrapped beads, like little bird's nests. I've been intending to try something similar, and yesterday I was in the mood to try to figure it out. Took a few stabs at it, with some false starts, but I think I approximated it enough to make it work. (I'm sure there's a "right" way to do it, and that's probably not what I'm doing...but they seem to stay put.) I have piles of small gemstone beads like this that I've never really found a way to use, but these small oval shapes seem to work well for this. I get really excited when I use up part of my stash! It was such a lovely day I repaired to my Auxiliary Driveway Studio and made these outside. I love summer! I photographed them at 9:00 p.m. on the porch and there was still plenty of light.

I also made this:
I had wanted the brass to be even mellower than this--it looked almost silvery when I took it out of the patina bath (some toxic stuff by Midas), but then when it came out of the tumbler it had regained some of its golden color. Ah well. I have four of these beads left! Going to use copper next time. From Bebesglassbeads. I bought some gun black way back that is supposed to turn copper and brass silvery, but it didn't work. Probably operator error.
Posted by lunedreams at 7:30 PM 12 comments:

I had a little accident today. I just couldn't hold it. I was idly fondling my beads, wondering what to do with the day, when a sneeze caught me off guard and the next thing I knew there were EARRINGS EVERYWHERE!! Instead of cleaning up the mess, I photographed it. See below.

Big microfaceted opalite roundels with tiny opalite roundels and antiqued copper. I got this long graduated strand of giant opalite from a seller in China or Hong Kong or somewhere. Very pleased! A mix of commercial beadcaps, and some I did with brass texture sheets and a hammer. Worked really nicely.
Lastly, Czech glass again, druk this time with a "lumi" finish--I love these beads. More textured beadcaps.
Well, that's all I got. I think I'm going to WalMart tomorrow. I'm going to try to get there before the scooters come. God help me.
Posted by lunedreams at 8:59 PM 11 comments: