I am nearing the end of my staycation, which started last Wednesday. Back to work on Thursday. I accomplished one goal, cut out a pendant with my saw and etch it. The other goal--make a bunch of stuff--not so much. At all. But I did get a bunch of pants.

So the sawing went OK (no broken blades yet), but I didn't quite get it round. It's a tad lopsided. But I thought, that's OK, it will be a "rustic", "organic", "freeform" pendant. My idea for the bale turned out all right--I left a tongue at the top that would be curled under later. 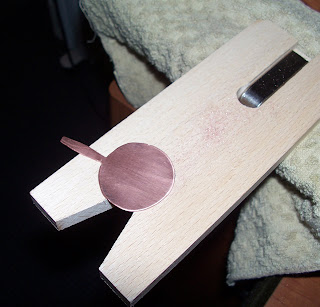 So after I had the edges all ground and sanded and all that (I have no idea which attachment to use on the Dremel so I used them all), I drew my design on it with Sharpie markers. 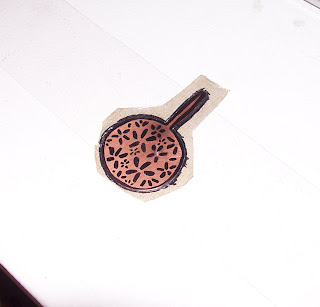 I tried to ink up the edges really well too so those wouldn't get etched. I stuck a piece of duct tape to the back and really stuck it down by rubbing it with something (I don't remember what), to keep the back from getting etched. (Worked like a charm.) I donned my protective gear:

Then I put it in the acid bath. At 1/2 hour I checked it, and half the ink looked like it had washed off. So I took it out, neutralized it, and reapplied the design with fingernail polish. Oy. I don't recommend this, but it was all I had. (I made a bit of a mess with it. Lots of stray smears and stuff). I put it back in the bath, and then noticed that one of my markers was actually a Sharpie Rub-a-Dub Laundry Marker. Silly me. Perhaps that was part of the problem.

It took about 3 hours to get a decent etch. I would have liked it deeper but my sheet was only 20 gauge so I called it good. (There are a couple weird circle things on there that I think are from bubbles.) Took it out and cleaned it up, sanded it a little, domed it some, and then patinated it in the liver of sulfur. Tumbled it. This is the final product:

It's a tad, or maybe outrageously craptastic, but the process seems to work in theory. Before I attempt another one, though, these are the things I need to do first:

1) For a pendant this size (one inch in diameter or larger), I need much heavier gauge sheet, like maybe 16. I think 20 would be OK for charms. It just feels too flimsy.
2) Find a better resist. I ordered some pens from an electronics company that are made for this kind of thing (or rather circuit boards), I'll give that a try. I'll poke around on the Internet too for other resist media (any suggestions would be welcome). Apparently Staedtler red ink pens work better than Sharpies. Eventually I'll probably try the laser printer/toner transfer thing. Maybe. It would be nice not to have to draw anything.
3) Learn how to use the grinder attachments on my Dremel so I do a better job finishing the edges.
4) Probably clean it better before applying the resist, like get some citric acid cleaner to make sure there's no oil on it. Should have sanded it more to give it more tooth.
5) Remember to wait to curl the bale under until AFTER I've domed it. Duh.

It's too craptastic to sell, but my goal was to become unafraid/unintimidated by the process. Goal reached! I have to say it's a huge PITA actually. Sawing takes forever. My hand got really tired trying to hold the piece down on the bench pin. My metal shears work well on this gauge metal, but I don't think I could use them on say 16 gauge. (I have a pair of straight shears, and a pair with a left curve that I thought I could use for cutting circles but I haven't tried it yet). Etching takes forever too but at least you can go do something else while it's cooking. I think if I had the right tools/materials it would turn out a lot better. I'm really looking forward to spending more money on that. I love that. Spending money. Because I have so much of it. Money everywhere. Just lying around in big fat piles. Big fat piles of money. You know how it is.
Posted by lunedreams at 9:40 AM