Yak Bone: It Doesn't Get More Elegant Than That 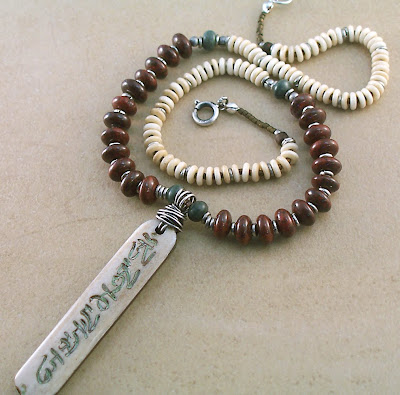 I found these lovely, rustic pendants on Happy Mango Beads a while back--they are handmade of yak bone by Tibetan refugees living in Nepal, and inscribed with the words "Om Mani Padme Hum", a common mantra associated with Tibetan Buddhism. (Even though looked it up, I have no idea what it means. Perhaps some of my readers are Buddhist, or Tibetan, or both, and can explain it.) I thought the pendants were lovely and the words inscribed probably reflected something good. If it's good enough for the Dalai Lama, by gum, it's good enough for me. 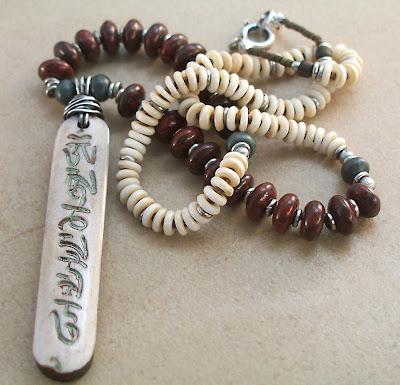 The necklace above was made with the ivory-hued pedant; I have another in a rich brown stain as well. I used brown silk beading cord, but ended up not exposing the knots. The cord was really too fine for the knots to play much role in the design so they're mostly hidden. Instead I used really tiny matte finish seed beads in a cocoa color between the ivory bone spacers, and silver heishi between the dark jasper roundels. Fusion Beads has some awesome seed beads, in every finish and color imaginable. It's like collecting nail polish. I keep buying them but I never use them!

I have a stockpile of smaller, really beautiful beads I'm going to start using though, even the itty bitty beads. A friend I recently made a custom piece for begged me (OK, begged is a little strong, but she did say "pleeeaase") to make some more delicate pieces with smaller stones and beads. So that's what I'm going to do, probably knotted and strung. I especially love the little collection of small "glass tile" beads I found on Fire Mountain Gems a long time ago. They remind me of rough gemstones. 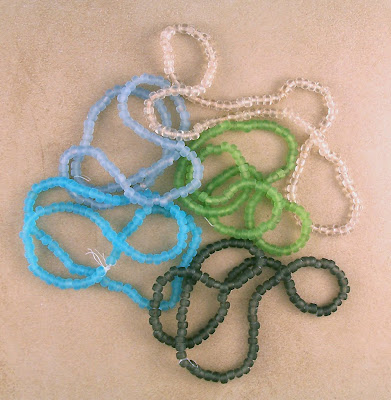 But before moving on to the micro beads I had to make this first. This second piece is the same design I've been doing a lot of bracelets in lately--several months ago I bought a pile of big 12mm beads thinking to make earrings out of them but they ended up in bracelets and necklaces instead. Still going to do earrings. Just haven't quite gotten to it yet. This one is with 12mm faceted red agate beads (I'm just enamored with these beads--I can't stop looking at them), some carnelian, red glass (that I cannibalized from some stretchy bracelets from the $10 accessory store in Vegas) and a couple milky-blue sea opal drops. Raw brass rolo chain from Ornamentea, that oxidizes so nicely--in a flash!! Absolutely no varnish on it, I love that. 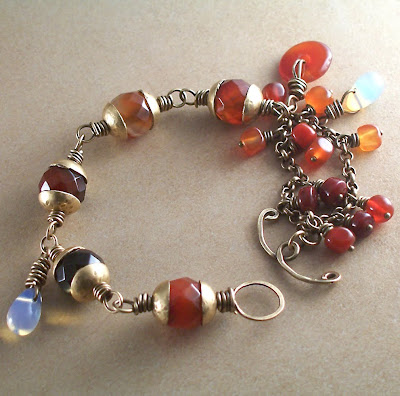 On a side note, I seem to have some deep metaphysical affinity with rugged-looking ruminant beasts. First the yak bone, and then it turns out, according to my Google Analytics account, that the top search term for my Etsy shop for March 9-April 8 was "how to spin qiviut." Qiviut is, I have come to learn, musk ox underwool. I do not use musk ox pelt in my jewelry, and I don't believe I ever mentioned musk oxen in any of my listings. It's just not a creature I think about much, and it never occurred to me to find one and shear it and make a sweater out of it. But by some circuitous route, on 8 separate occasions, curiosity about how one might turn musk ox fiber into yarn led people to my jewelry shop.

Posted by lunedreams at 5:55 PM