I set out today to anneal and texture some things. (I belatedly realized that annealing my copper items before using my brass texture sheets and hammer on them would make things a little easier on the sheets because the copper would be softer. Ah well, live and learn). As I was looking for a copper flower I had cut out, I came across a rectangle I had cut out. Not sure what I had in mind when I cut it out but I decided to try to turn it into something. You can see it here: 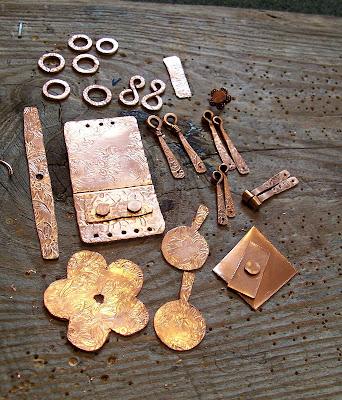 I was going for a two-tone texture, so I used a couple different sheets, and made a border between them. (Not sure if that is going to just stay that way or not...) Because my texture sheets are getting all curled I didn't get a good impression--they don't really work well for large items. There were some holidays here and there, especially in the lower portion. So I decided to cover them up. I had another small strip of metal lying around so I textured it with a third texture and thought, well, this would be the perfect time to attempt a rivet. So I did a trial run (with the square and rectangle in the lower right--pretty, huh?) and it worked, so I plunged in. I used copper tacks from the hardware store, so it was pretty easy. (Learned that from a Sharilyn Miller video!). I put the pretty side up and only had to hammer the back. Worked great!

I'm going to rivet the large flower to the long strip of metal just above it (with a little flattened flower beadcap added--that is in the upper right corner of the picture), and use the strip to fashion a clasp. Then I have a plan involving pearls, more copper, and Swarovski crystals. (Unusual for me to use those.) It will be a necklace.

Those things that look like ping pong paddles will hopefully be earrings--I'm going to curl over those tongues of metal sticking out and make them into a bail to hang them from. But first, the liver of sulfur and then lots of tumbling.
Posted by lunedreams at 1:00 PM