My recently riveted and stamped items have had their sulfur bath and been tumbled for hours and hours. They didn't get as glossy as they usually do (WTH?) so I burnished them by hand with my new burnishing tool. 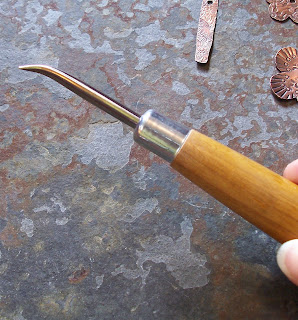 Looks wicked, doesn't it? Like a dental pick for Clydesdales.

Here is my pendant focal rivet project antiqued and ready to be tarted up: 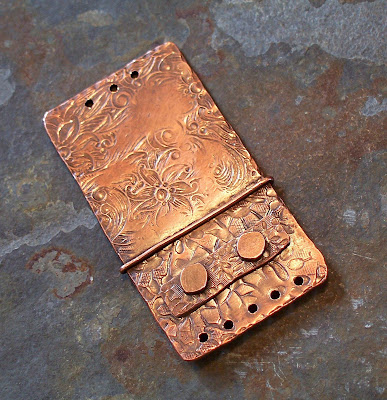 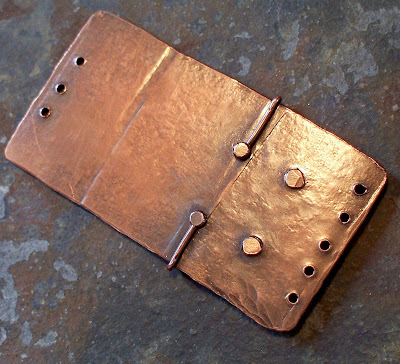 I decided to lay a piece of 18 gauge wire in the little channel I made instead of leaving it. I wanted the back to look better so I balled the ends and hammered them before squeezing it tight on there. The wire was really soft from heating so it really clamped on there nicely. It sort of looks like a hinge to me on the front. Or some piping on a duvet cover. And now I will agonize, probably for days, over what to do with it. It will hang from three heavy gauge jump rings, and I might hang something from each one as well. Or just the middle one. Then decisions will have to be made about what to hang from the bottom. That will cause me sleepless nights. I'll have to take a pill. And then of course how to do the necklace portion. Knotting? Stringing? Wire links? Chain? Things will be assembled and disassembled. There may be weeping. It must be Triple Extra Special.

The flowers, destined for necklaces and bracelets, and the ping pong paddles for earrings: 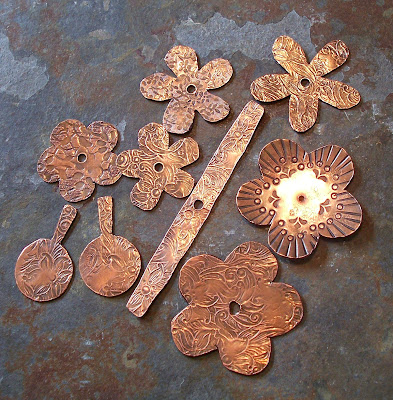 And then my little earring bars and rings: 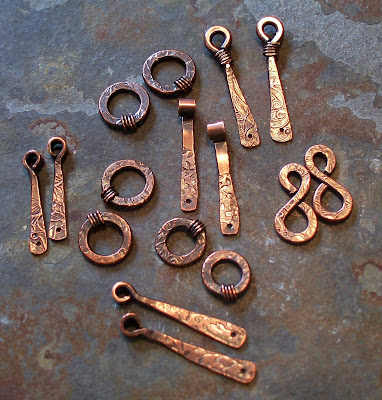 There will be more agonizing with these, of course. Except for the textured flower and strip above because I already know what I'm going to do with that. Of course, it might not work in which case there will be agonizing.

My boyfriend is off hunting antelope this weekend so I am a bachelorette.  This means 80s music on the stereo (New Order and Simple Minds, over and over and over and over and over again), no leg shaving, probably no bathing until tomorrow (pesky day job, they expect a certain level of hygiene), unrestrained ADD-like behavior (I'm sawing a board while I'm cooking eggs except for when I take a break to look up "gulag" in the dictionary because now that I think about it I'm not really sure what it means), tools and copper tacks in the middle of the floor (which will probably later lead to cussing), and sleeping with my 27-year-old college teddy bear (yes I'm that old). You thought I was going to say college boy, didn't you? Although that would be kind of old for a college boy. Graduate student then. Doctoral candidate.  In something interesting but economically useless like sociology. There's probably not that many of those around here since we have no university. I think I prefer my antelope hunter anyway. I don't think I could really be with someone who wears socks with sandals or has a beard. I hate beards.

Posted by lunedreams at 9:59 AM