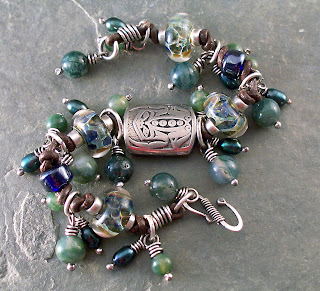 "Frog's song calls down the cleansing power of the rain. Frog is a reminder of the sacred power of tears to transform and cleanse away sorrow. Frogs will die if away from moisture for too long, and thus Frog reminds us to refresh ourselves, and allow joy to moisten our lives and our hearts. If you are feeling "muddied" by the world, take a moment to dream, to laugh and cry and renew yourself. Frog also reminds us to cleanse our bodies, our environments and our auric fields. People with Frog energy should learn and utilize methods of psychic cleansing."

I made this today with a pewter frog totem from most fabulous Happy Mango Beads, combined with lampwork from Pat Redinger at Beingbeads, and a stash of moss agate in a couple different sizes I completely forgot I had and obviously never really looked at closely because if I had I would have been OBSESSED with it and ordered 10 more strands and 80% of the stuff in my shop would be made with moss agate. It ranges from translucent, pale iceberg blue (even sometimes approaching periwinkle) through teal blue to vivid viridian and even towards a yellow-green, all of it with a delicate, glassy translucency, and fascinating veining that really does look like moss. 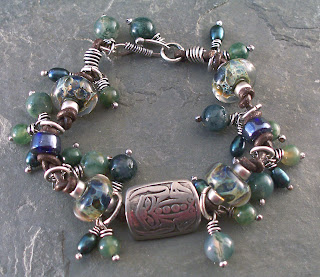 I added some little rice pearls in iris green. I've been meaning to use this totem with some of my blue-green lampwork from Pat and decided today was the day. And it wasn't even something I started two weeks ago and then stared at! I started it late this morning, and finished it the same day. Frigging amazing. I had to periodically LOS-ize more sterling wire, and melt more headpins in my torch, but it went pretty smoothly. My owl totem bracelet was very similar so I kind of knew how to go about it. This time, though, I looped the leather through a jumpring and wrapped it securely with a coil of silver wire, instead of using the crimp ends like I did with the owl bracelet. That was easier than I expected it to be. 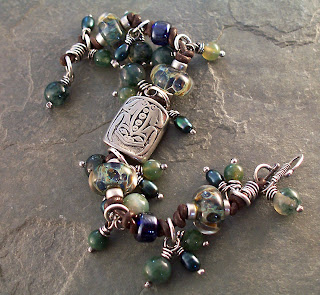 I really do like frogs, actually (if I start collecting figurines in my 80s it will definitely be frogs--in fact my favorite is the poison dart frog). And I have been known to periodically sob in the restroom (public or private), after which time I generally do feel better although I look like crap. I had always thought I was just having a breakdown, but it's such a relief to know I was only instinctively cleansing my auric field. Moistening my, ah, life. Getting my Frog energy on.

What is Frog telling you?

Posted by lunedreams at 7:43 PM