with my own schtick. Bored, bored, bored. Here's how it happened: I was shopping on Etsy the other day and fell prey to some of Sue Kennedy's (Sue Beads) enameled skinny cones. These are what I bought:

I'm not entirely sure what I'm going to do with them, but I had to have them. And the moment I saw them, I became instantly sick of everything I'm currently making and everything that's sitting in my shop. Hate it all. I want to do Something Completely Different. But I have no idea what it is. Whatever it is I hope to God it involves all the crap I already have because I can't afford to acquire a completely new collection of crap. I don't have anywhere to put a completely new collection of crap. And I hope it isn't going to take a bunch of time because I don't have that either. Perhaps it's just a mood. I do have a sinking feeling, however, that scratching this itch will probably involve buying more tools and related paraphernalia. Or at least some resin. And maybe an enamel setup (I just feel suddenly captivated by enamel--Maire Dodd started me like on the subtle, "gateway" version and then Sue Kennedy hit me with the hard stuff and I was powerless to resist. And of course now Barb Lewis has virtually everything in her shop that you need to do your own enamel). I don't have time for this obsessive crap. Crap is such a great word, isn't it? Sounds like exactly what it is. Crap. No mistaking "crap" for anything else. And my existing crap has already taken over the kitchen and living room. I don't have any room for new crap, unless I get rid of the old crap. (Do I really need all those clothes? The closet and bedroom chest of drawers would be so handy for all my jewelry crap. Not to mention the medicine cabinet...Maybe we could keep our dishes on the porch and I could put more jewelry crap in that cupboard...)

Color, I think I need more color. Color in unexpected places. Which I think is why the enamel is appealing to me--Look! a chartreuse toggle clasp! Look! Purple bead caps! Oh look! Pumpkin headpins! (And I think I am also going to have to transfer some more of my supposed-to-be-going-to-savings funds to Shannon at Miss Fickle Media for the same reasons. I will expect you one day, Shannon, perhaps thirty years from now, to spring for a can of cat food for me to take back to my lean-to under the bridge.) I am also slowly picking up, here and there, with each order of staple items various hues of silk string and ribbon. Without any clear idea of what to do with it (tie my crap together so it doesn't get lost?). Unfortunately none of the silk string I bought turned out to be the color it was advertised as (teal and sea green are apparently the exact same color--dark ELECTRIC aqua, and "olive green" is actually BRIGHT GRASS GREEN), but oh well. So I think the next few months are going to consist of torturing myself to figure out what to do with my new crap (which I hope won't take up that much room), while having it still be wearable. Maybe all I need is enameled bead caps. And that'll do it. Or maybe I should just color my hair and get a tattoo. Maybe this is what a mid-life crisis feels like (although I'm WAY too young for that). Anybody ever had one of those?

So without further ado, here's some more tired crap (because I don't have the enameled cones and silk ribbon yet):
Lampwork, burnt horn, chrysanthemum stone, brass and greek leather: 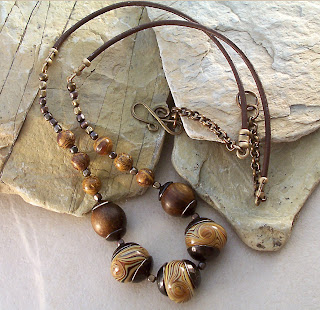 Lampwork by Karen Hardy and porcelain by Macarroll (the two UN-crap (and absolutely fabulous) elements in this more-of-the-same-crap necklace), and some ebony wood and moss agate: 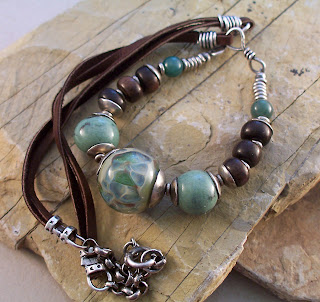 Unakite and copper, with bone, of course. (I don't particularly like this one).

And one of my recent custom pieces. I actually sort of like this set, especially the earrings. It's wooden jasper, a little moukaite, and copper: 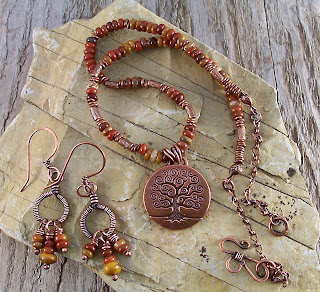 Ho-hum. Not sure where my blahs are coming from. Maybe I just need a life. Like somewhere out of the house. With some people in it. Other than me.
Posted by lunedreams at 12:12 PM