I bought this stone donut a couple weeks ago with a vague idea what I would do with it. I nearly drooled in the store over the creepy black veining in it--makes me think of the black moss that hangs from the conifers up here. It is so not my usual style, but I was determined to try something different (I think the market for casual jewelry is probably a little bigger than the market for royal interview/Academy Awards/ballroom jewelry.) I was nervous about making the bail though (I mean, my God, 16 gauge wire is, like TWENTY THREE CENTS an inch--that's like, a quarter. Seven more and I could do one small load of laundry.) I wanted to make something kind of almost noir, maybe sort of Old World, maybe it would turn out kind of Mad Maxx. Or Anne Rice. Or sort of industrial. My only goal was that it not be frou frou. I collect shiny things and hide them and then make jewelry out of them that tries gamely to be casual but doesn't quite make it. Too much flash. Things start out as Just a Simple Pendant and end up as a Coronation Neckpiece.

Well, this one didn't quite make it to Mad Maxx. Little too dressy probably for Aunty Entity. Stopped just shy of casual. It's more like, maybe, something the wife of the Mayor of Barcelona would wear. But I think it's a step in a good direction that it looks more like Spain than Beverly Hills. I think that's partly because of the focal piece--it doesn't glitter or anything. Just trying to diversify. My current inspiration is an artist named Lorelei Eurto. Here is one of my favorites of hers: 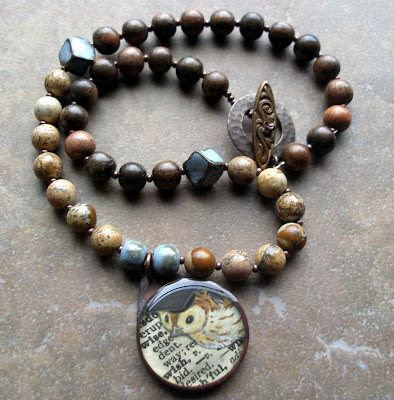 (CLEARLY I HAVE A REALLY LONG WAY TO GO). This kind of design doesn't come naturally to me (being, apparently, a disturbing human-magpie hybrid, all the supplies I have are really shiny), and I'm trying to be disciplined to use what I have before buying more. But I did buy four bottles of highly caustic substances for oxidizing metal in an effort to increase my inventory of "casual" (non-shiny) jewelry--if you never hear from me again you'll know that I used it in a poorly ventilated area. 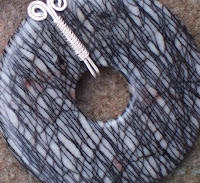