As opposed to The Golden Horde, a Mongol and later Turkicized khanate that was established in the 13th century and formed the north-western sector of the Mongol Empire.

In this case, it's a strand of pearls, in mingled antiqued copper and old gold, that I've been hoarding forever. I think I used one in a bracelet once. 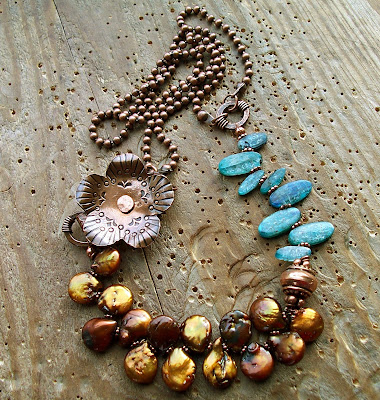 I've combined them with beads from another couple strands I've largely been hoarding (I think I made a pendant with them in 2009), of azure kyanite spears. I'm in love with both these elements! The pearls are rustic in the extreme; they range in color from old gold to almost dark persimmon, in shapes reminiscent of spilled molten metal--as if they were spewed from a forge and cooled where they lay, with the sooty evidence of their origin collecting in folds and fissures. These kyanite have lovely schiller, like each is home to a tiny, cool flame that lights it from within. They're a lovely melange of viridian and cerulean--two of my favorite colors, and words! 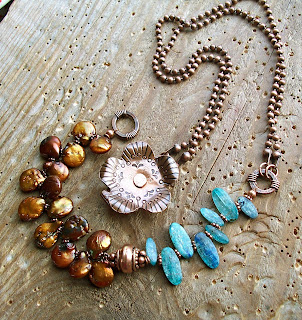 I started out with one of my flower clasps, intent on turning it into something wearable. I originally had very different plans for it, but when I thought of these pearls I had to use them. The clasp fastens underneath the flower itself, making it largely invisible. (I photographed it on my old plank washed up on the shores of Flathead Lake--I drill and hammer on it, and generally use it as a lap-desk. I made all those little holes myself.) 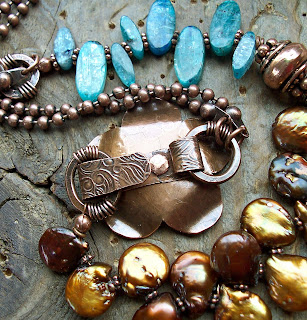 I designed it to be worn with the clasp to the side. I am really stuck on this configuration right now, I think the clasp reminds me of a corsage. 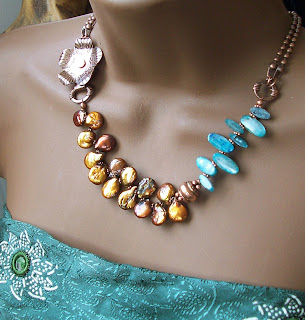 Posted by lunedreams at 1:03 PM

Sometimes the Best of Friends

God made Truth with many doors to welcome every believer who knocks on them.
-- Kahlil Gibran

With a Side of Sour Cream

If I had only known, I would have been a locksmith.
— Albert Einstein

With a Splash of Cognac

It is hard enough to remember my opinions, without also remembering my reasons for them!
— Friedrich Nietzsche

Usually Not a Good Idea

I find television very educating. Every time somebody turns on the set, I go into the other room and read a book.
— Groucho Marx

Clothes make the man. Naked people have little or no influence on society.
-- Mark Twain

As long as you derive inner help and comfort from anything, keep it.
– Mahatma Gandhi