Hearts and Rivets: They Go Together 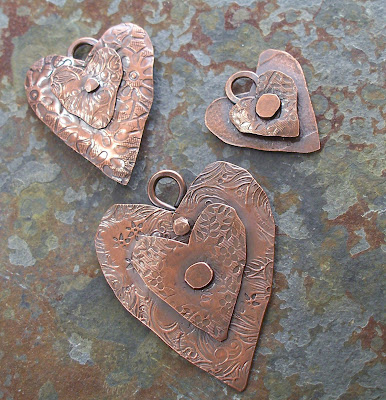 I've been wanting to do some riveted heart pendants for some time. Today I got busy. I LOVE doing these hearts because I don't have to use my saw on them! I hate sawing. I cut them out entirely with my metal shears--my straight cut and my left curve shears. I cleaned up the little tooth marks from the shears with fine grit sandpaper, they came right out. Voila! No sawing. I love the sort of blocky edges I get with the shears--the hammering with the texture sheets then softens that out a bit.

I layered these hearts using rivets (actually, copper tacks from the hardware store!), and then created a loop by attaching a wire figure-8 with the rivet. (I learned that from a Sharilyn Miller DVD, Ethnic Style Jewelry--lots of handy stuff!) 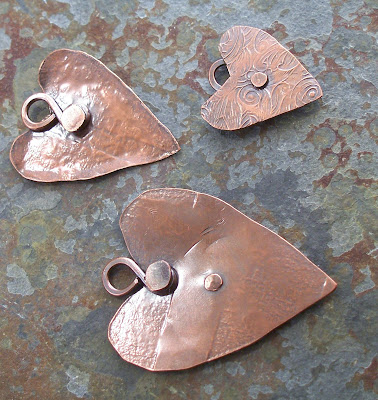 On a couple of them, I only used one rivet to attach both the second heart and the figure-8; on the big one, I used two rivets to attach them separately. 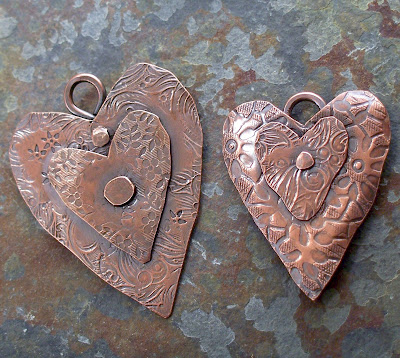 The smallest heart I will use as a bracelet charm--I'm always a little frustrated using one-sided charms on bracelets, because with the way bracelets move around, you see the wrong side of the charm as often as you see the front. I wanted to make double-sided charms, but you can't really do that with a single sheet and the texture sheet/hammering method, because hammering the second side takes the texture out of the first side. So I thought I would just use two separate hearts, attached with a rivet, with the figure-8 loop in between. (And now I like that "3-D" look so much, I wish I had put the figure-8 in the middle with the other two too. I think I may do that from now on.) 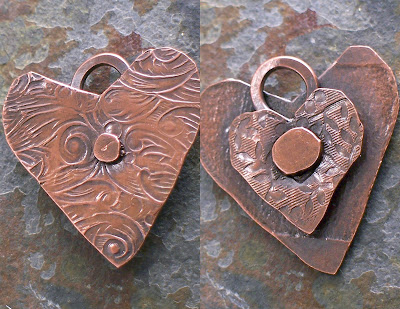 I also textured and antiqued some copper strips to turn my copper flowers into clasps or usable components. I just have to rivet the strips to the flowers now, and decide how to configure them.

Then I have to use them in something. That's the hard part! I'm thinking of opening a second shop for components--then YOU would have to figure out what to do with them. :-)
Posted by lunedreams at 5:00 PM